How Oakland has Inspired our culture here at CodeCrew

We're hella flattered that you care about who we are (heck, we’ve had first dates that show less interest in us). So you want to learn How Oakland has inspired our culture here at our boutique email marketing agency? That's so sweet of you! Trust me; we won't let you down 'cause (in case you didn't notice), we absolutely love talking about our wonderful town aaand ourselves.

This giant urban cultural mecca didn’t only inspire the great Walt Disney but also this fun-loving group of email marketing experts, web developers, and design enthusiasts that we call CodeCrew. And that's exactly what we'll be chatting about today as we uncover of the culture of Oakland.

How Oakland has Inspired our culture here at CodeCrew Post Highlights:

We're proud to say that The Town has a rich intellectual history. As well as the revolutionaries that called Oakland home, the culture of Oakland has given the world so much. Most of you might think California’s UC university system started in Berkeley. But you know what? It actually started here in Oakland. Yup, you heard that right! The University of California was founded on March 23, 1868. Before moving to Berkeley in 1873, it operated in Oakland. Take that, Berkeley!

Its first graduating class was known as the 12 Apostles. It included a U.S. congressman, future governor, mayor, two UC regents, a bank president, a businessman, an attorney, a math professor, an engineer, a clergyman and a rancher. To put it mildly, these dudes were pretty darn influential.

Today, the UC system has over 1.8 million living alumni, having educated generations and generations of Californians. It’s been a wellspring for many bold ideas that have helped make the Golden State what it is. 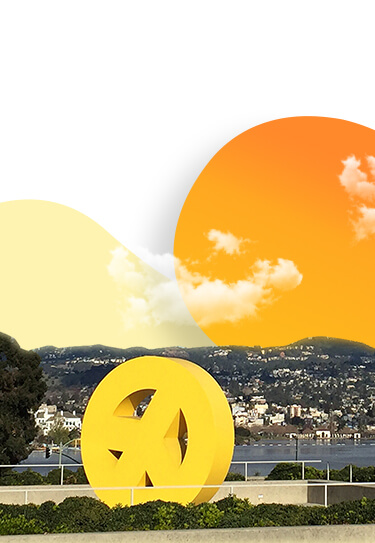 There wouldn't be a Disneyland if it weren't for Oakland

Yeeeeeah, you read that right. Yes, sure, we like to talk ourselves and our city up, but we don’t need to embellish here at all.

It's time to chat about Disneyland a little bit - yup, I'm talking about one of the most unique places on earth. What does it have to do with Oakland? One word: Fairyland. Did you know that there wouldn't be a Disneyland if it weren't for Fairyland? Yup, you read that right! Disney's creator, Walt Disney, was inspired by Oakland's lovely little escape from reality right by the lake. Fortunately for Disney, his theme park actually went on to be one of the most well-known places in the world. But again, it's thanks to our lovely Town. You’re welcome, Walt.

Oakland is home to a real gem of a storybook theme park. Although it didn't become one of the most well-known places in the world, Children's Fairyland has been delighting families since 1950. As the story goes, Walt Disney visited Fairyland back in 1955 and shortly after that, he built Disneyland. Moreover, he hired Fairyland's first director to work at his new amusement park in Anaheim. So there's no denying the fact: Oakland’s Fairyland was the OG Disneyland before Disneyland.

While Disney's parks went the commercial route, the Children's Fairyland turned into a nonprofit after several years of being managed by the Town. This lovely park remains a big part of the culture of Oakland.

More Than a Game - Sport and Society in Oakland

As you already know, professional sports are a huuuge part of our culture here in the states. Millions of folks attend various sporting events to cheer on their favorite teams all across the country. That's hella cool, but it's not just about winning. It's about the huge rewards that come from being part of a team and aiming for the same goal. To be the best at what you do.

Oakland is the only city in California that was home to three professional sports teams: the infamous Golden State Warriors, the notorious Oakland Raiders, and the amazing Oakland A's. Unfortunately, two of these three teams had to say goodbye to our town for one reason or another, but hey, we still have the A’s and to be honest, it truly is a team to be proud of. These guys have won nine World Series championships and fifteen AL pennants.

In the late 1990s, they turned to a completely new management strategy that focused on acquiring lesser-known players by giving added weight to in-depth statistical analysis. This strategy became known as “Moneyball” (named after a best-selling book about A’s general manager Billy Beane). After the A's implemented this system, numerous franchises began putting variations of that strategy into practice as well.

These guys really show us what teamwork is. To win a championship, a promotion, or a marketing game, all you have to do is to beat the immediate competition, right? In order to achieve that, you don’t need billions, just a bond that promotes strength, creativity, reliability, unity, and support. Maybe we’re not too different from the A’s here at CodeCrew as we thought.

Art Deco Architecture in the Downtown

During Oakland's manufacturing heyday between the 1920s and 1940s, tons of Art Deco style buildings went up. There are plenty of fabulous Art Deco elements throughout the Town, in all of their gorgeous terra cotta mosaic glory. The Paramount and Fox Theaters downtown are two of the most iconic (and most beautiful) Art Deco buildings, aaand there's also the Grand Lake Theatre next to Lake Merritt.

Let's just get this out of the way: there's no way you can talk about Oakland and not mention race and social justice. The Black Panthers obviously got started here, along with many an uprising or revolution for peoples’ rights. Oakland is a town on the forefront of nearly all social movements in the US. This beautiful place has been a mecca for people of color and civil rights for as long as our neighbor; San Francisco has been a mecca for inventors and entrepreneurs. Want to find out more about that? No worries, we've got you covered. Check out our blog post about social and creative movements in Oakland here.

Culture and art often intertwine, especially in a truly diverse city like Oakland. This is a multicultural city, where African-American, Asian, Pacific Islander and Hispanic influences are strong. Over 100 languages are spoken around the Town and over five different languages in CodeCrew and they're represented artistically in various ways. This Town doesn't make it easy at all to feel smug about your insider art knowledge, because the arts scene in Oakland will never ever stop blindsiding you.

On the weekends, Oakland's public spaces and parks are stages where performers and artists go wild. But even during the week, the Town is alive with creative types doing what they do best.

Where do you think you're going?

So, you probably feel like you know these email marketing experts and our Town very well, do you? Trust me; there's so much more to learn about the wonderful areas, people and cultures that are surrounding us as well as the opportunities this place has for young folks. And if you want to find out how to green your business here in Oakland you can check out our blog post here. Trust us, the wonders of the town never ceaseand there are so many communities that can serve as a great example of that, led by CodeCrew of course. Just stay tuned and you'll see.

Today’s most
exciting start-ups
trust us to be
their
email marketing
consultants.

Reach out and learn why we're
averaging over
1,300% ROI
for our clients.

Co-founder and Director of Design at CodeCrew’s, Alex is behind our development and success. She’s been designing websites and improving the way people interact with emails for over 7 years, working with brands all across the web and helping generate email marketing revenue that's worth building into case studies.

Why Content can Make or Break your Email Marketing

The Merits of Good Design in Email Marketing Campaigns

Why Segmentation is Important in Email Marketing

Learn how to avoid the dreaded Email spam filters