Our Neighbors – The Inspiring History of San Francisco

From Oakland to San Francisco

After our Oakland blog post, we thought we should write one about our neighbors. Did you know that Oakland and San Francisco are connected by a railway AND a bridge? Though that’s not all. If it wasn’t for the San Francisco tech boom, CodeCrew, our boutique email marketing agency, might not exist. So here it is, a little San Francisco city history.

The history books will tell you that San Francisco was founded by Spanish Colonists in 1776. The truth is, it was discovered waaaaay before then. In 3000BC, the Native American Yelamu Tribe first arrived in what we know today as The Bay Area.

In January 1848 the gold rush sent hundreds of thousands of people to San Francisco. Though they didn’t only strike gold. Mr Ghirardelli of Ghirardelli Chocolate came from Italy with dreams of becoming a successful gold miner. Instead, he ended up getting rich by selling the famous chocolates we enjoy today.

And of course, all that gold needed to be shipped somewhere. That’s how Wells Fargo the famous shipping giant was founded.

We can learn something from the early San Francisco city history. If things don’t go according to plan, you can still be successful if you’re willing to be flexible. 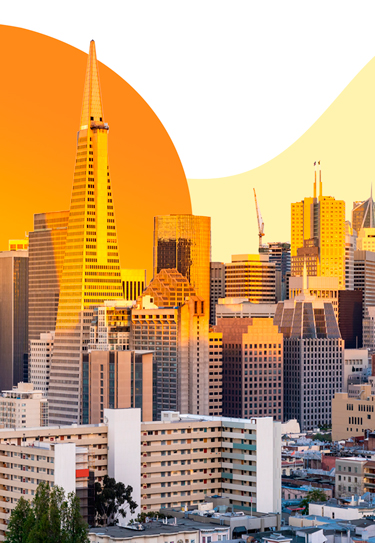 San Francisco has always been an artistic and cultural Mecca of America. It's home to pioneering modern artists like Wayne Thiebaud and Marcel Duchamp. Whats more, The Golden State has its very own Museum of Modern Art.

In the swingin’ sixties, artists like the Grateful Dead and Janis Joplin played Acid rock to huge crowds of hippies. As the famous song goes, “If you’re going to San Francisco, be sure to wear some flowers in your hair”.

Then, in the 1980s and 1990s, some great bands launched their careers in this great city. Crows and Third Eye Blind, to name a few.

Interestingly enough, the Beatles held their last-ever concert in San Fran, at Candlestick Park for 25 000 people.

Just like Oakland's social justice movements, San Francisco's role in supporting gay rights is legendary. Once voted ‘The Gay Capital of America’, SF is the kind of city that welcomes everyone without discrimination. The first gay bar in San Francisco opened its doors in 1908. Also, the first official Lesbian organization, Daughters of Bilitis, began here in 1955. And Harvey Milk became California’s first openly gay politician. He ran for senate in 1977.

As a full-service email marketing agency, we had to mention the famous Silicon Valley. A huge part of the tech boom. It all started with a university founded by Leland Stanford in 1891. Stanford University attracted many engineers and inventors who then started some of the biggest companies in the tech industry.

These companies included Hewlett Packard and General Electric, to name a few. Today, Apple, Microsoft, Facebook and Google all have offices in Silicon Valley.

And even now, San Francisco continues to make history. It’s leading the way in the green business movement - something we’re super passionate about. Plus, its culture is stronger than ever. The Golden Gates are always ready to welcome all dreamers, hustlers and artists. Those that add their own unique magic to the state of California. At CodeCrew, the SF spirit of community and innovation inspires us every day.

Today’s most
exciting start-ups
trust us to be
their
email marketing
experts.

Reach out and learn why we're
averaging over
1,300% ROI
for our clients.

Co-founder and Director of Design at CodeCrew’s, Alex is behind our development and success. She’s been designing websites and improving the way people interact with emails for over a decade, working with brands all across the web and helping generate email marketing revenue that's worth building into case studies.

GetResponse: How To Get The Response You’re Looking For